On the 15th of October 6 girls decided to join me on a photowalk to old Delhi. We got off the metro station and asked our way to the first most famous alley way (known as a Galli) called Paranthe Wali Galli.

As I decided to single in on a red-headed man who squatted on the floor I realised that my camera-mates were harpooning him with their ever-shifting lenses that protruded out at his vegetables, his scale, and his face. Seeking a position over his head like an aggressive magpie I yearned to get his vendor selling techniques in more detail, like a searchlight of a helicopter inspecting shrubbery for a criminal’s whereabouts. The redhead stopped, looked up and muttered at me. Bloody cold he was. I decided to inch away and go over to his arch nemesis in the world of street side veggie selling. 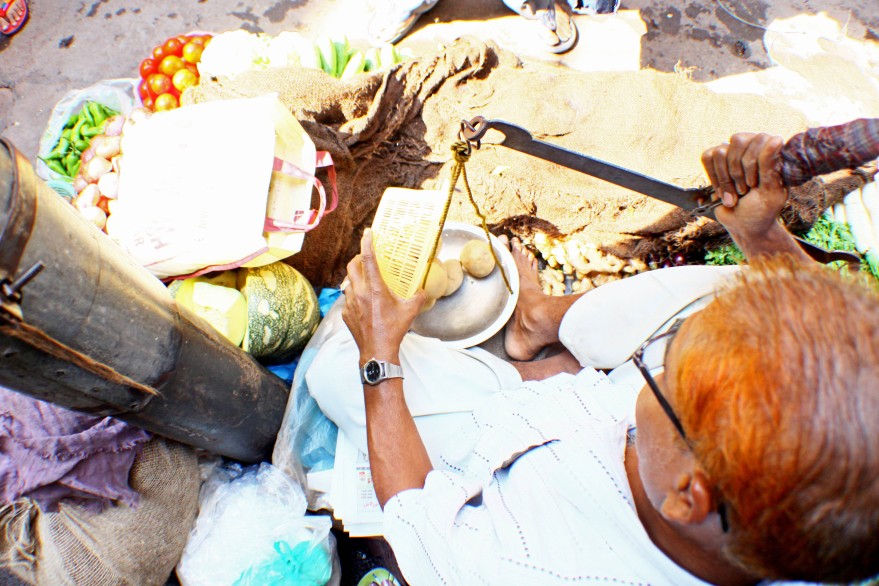 This amigo looked like a character from some telenovela; mustachioed with ebony black straight hair, his eyes were bright, actually wide- a bit too wide as if he snorted something in full blow (quite possible in a place like that). With full gusto he lifted his scale up high, proud to his bones to be on camera (for a ‘serial’s shooting’) and about the fact that his produce was selling like hot cakes compared to the other man’s- his business was sucking because his stuff was as good as ”kheede” (bugs) the amigo told me, and he also spitefully added that there was nothing he could do about it (Indians have a very clever way of insulting others-they gain sympathy and agreement by automation from bystanders).

Progressing into the folds of the Galli, we came across many creeps indeed. They were the sorts that looked decent on the whole, a typical quality possessed by the wider array of delhi guys. It was Karva Chauth- a ”festival” where women starved themselves for their husbands. All these men were steadfast in their usual routines of grabbing some fried breakfast before frying other people’s brains in their own shops around the corner.

Down the Galli our gang of clicking chicks strutted out with the most perfect ISO’s and came face to face with another gang…The Barbers of Paranthe Wali Galli.

The head man frowned from his sleepless furrowed brows, clutching onto his conical cutting chai glass.You can always make out the head of a gang. They are Napoleonic in physique and Cassius like in their facial features. Small boned, with dark sunken in eyes. They also try to be really charming- just to throw you off.  This Scissored Napoleon decided to wield us alone, while his chubby faced troupe stood behind to guard their shaving brushes, agarbhatis, and splutter stained mirrors. One of them tried the whole ‘oh I’m relaxed and going to intimidate you by simply lying here in a grotesque way’ tactic. He literally lay back on a side bench with one leg up and a chai glass resting on his raised knee. The Napoleon chatted us up, initially instructing me to take photos first and ask questions later. Did I adhere? Nooo. However, I found myself having to explain to him the difference between a still camera and a video one. I fell for the stupid trick and only realised this half way, while carrying a big imaginary camera with a sound sync microphone on my shoulder. They laughed. All of them. Scoundrels. Napoleon got all cocky after that and went beyond asking us why we were there. I guess many girls amongst us didn’ t really feel like telling him their ages or what they thought about his looks. A few girls were so taken by a stupid motorcycle laden with milk pots, that they managed to get a ruffian from the barber entourage to sit on it and pose for them. This was after his constant yelping about how his bike looked ugly that day and him being somewhere next to it would make an impressive shot. Some girls can be really stupid.

In some other hole in the wall, a man frying pakoras wasn’t spared from our gaze. He was asked if he too was keeping the Karva Chauth fast. His face froze and the 7 of us shared a good hearty laugh. On the side of his frying frenzy, I photographed a young couple sharing fresh kachoris from a small bowl made of leaves. The sight was beyond sexy for many Galli walas, who stopped and gave each other placid looks. Their wives were starving at home, remember. 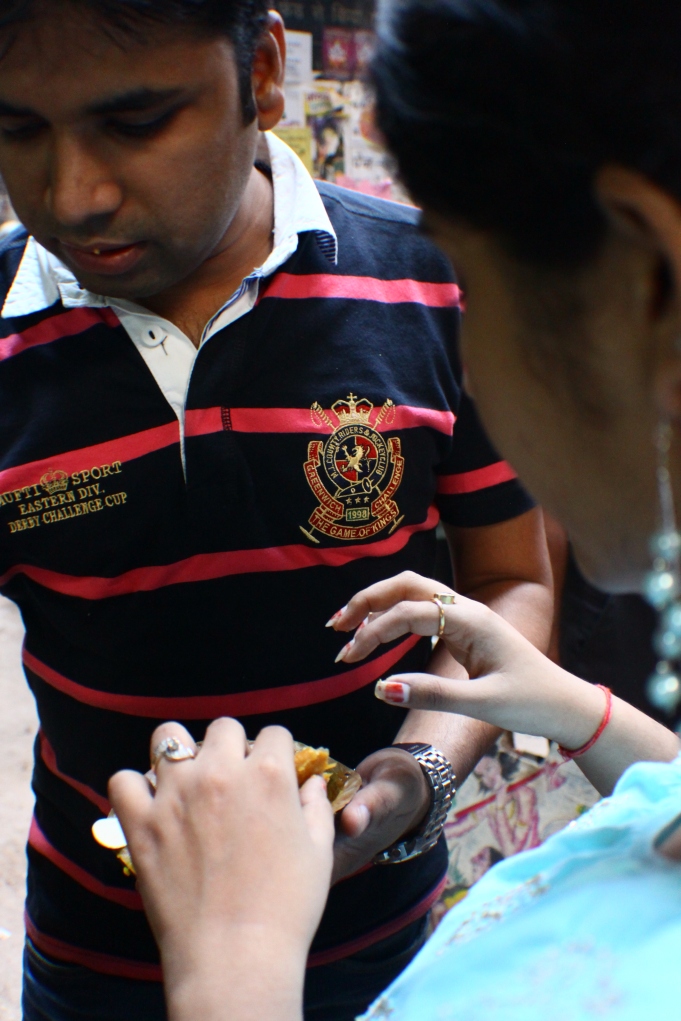 I was lured into a dark makeshift kitchen in a dark corner of one of the most spacious eateries in Chandni Chowk. The cooks sat on an extended platform and squatted over their slabs, which had boulders of white soft dough resting on them. The men ranging from the age of 17 to 71 come everyday to cook here in this corner from 7.30am and roll out their dough, heating them into delectable fluffs till 3am. 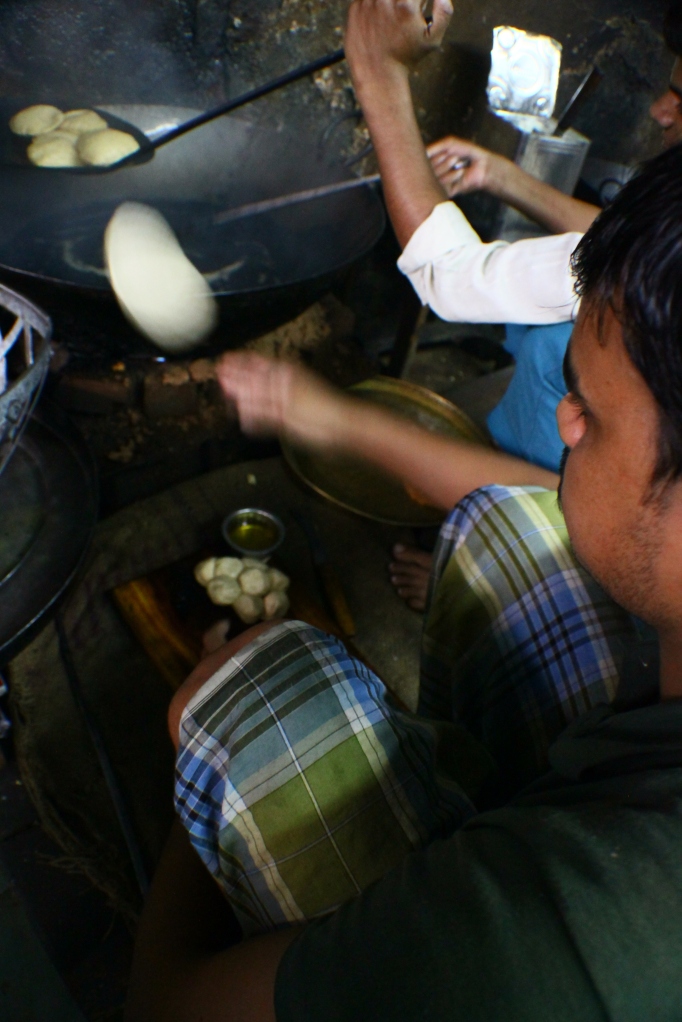 When I was clicking my way out of the joint, I was caught by a very nervous looking uncle who was gulping down his poori channas. He had visited the doctor just before and found out that he had serious issues in his kidneys. He wasn’t well , he told me, and after his fried pooris he was going to get some tests done. Roohi and I argued about whether kidneys got affected by high sugar, or was it only the pancreas. Then a horrible thing happened.

We walked into a film like traffic jam in the Galli. The only place we could stand was up against these half steps (the areas where shutters are locked to the ground) pressed against grimy walls. Rickshaws filled with disgusted and horrified looking foreigners collided into each other consistenly (even though they traveled at a snail’s pace) while laborious men carrying heavy boxes filled with supplies squeezed into each other. Uncles on motorcycles crab-walked along the centres of side gutters, electricians decided to fix a hanging wire which unusually hadn’t short circuited in quite a while. The 7 of us were sprawled along the edge of such congestion, and we lost sight of each other. 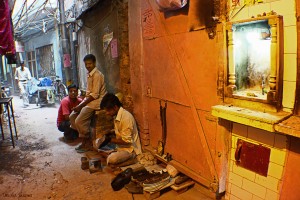 The only way we got to know where the others were, was by yelling down an ‘are you okay meet me in this corner at the end’. Then all of the sudden it was like a vacuum that sucked us into a dark alley aligned with cobblers who sat under the presence of the omnipresent, who fumed with sandalwood and jasmine scents from a brightly lit hole in the wall. The alley didn’t allow for an escape-it was a dead end. We were screwed. So, we walked up the Galli again (that was startingly empty all of the sudden) I got chest tapped and kicked the perpetrator in a warm spot between his butt cheeks, got applauded and we all trekked back to the point very near to where we started from. Not only did we pass our metro station, we walked across the tangle of Chandni Chowk to Red Fort, where we gave up holding our cameras after 10 minutes and listened to a story of how the area next to the fort used to be a lake where crocodiles would swim. It was bit of a stretch. We just wanted to eat some burgers at McDonald’s for heaven’s sake. And so we saddled up into 2 rickshaws and fumbled for a while as this girl alarmingly informed us that she didn’t know how to sit in one.

I had to leave the girls standing rather imposingly in McDonald’s (this was a way of getting people to move on after eating-we literally breathe down their necks and pass around snide comments) which was filled with many father-son duos (their wives were starving at home, remember) and I bolted with my dead phone (bad idea! Never let this happen to you when you go to north Delhi!) to a light stall next door. After faking getting all teary (which I didn’t have to do) the trio surrounded by halos of light bulbs like idols in a gaudy mandir, plugged my charger in a socket quite near the heavens. I waited and they paused between their business dealings to check my charge bar. After 5 minutes time was of the essence and I gave up, unplugging my phone-at which some oily smoker groggily whined  that I should leave it there na, let it charge since it wasn’t done yet yaar.

So that was sweet in a greasy way. In fact the entire walk cleared the smoke of this forced perception many folks try to imbibe in us, about staying away from alleys and places which are unknown, which are filled with men..about not venturing out on festive days. You bloody well should, in the safest way you can of course…but i decided to leave out those voices when I explored the tiny microcosms of a small part of the city, and I was deeply gratified by my experience.

2 thoughts on “The Photowalk at Chandni Chowk”