People generally relegate fashion bloggers to “airheads”, claiming that all they do is “commoditize” fashion victims. They fail to see that they have an important role in society as  they observe and criticize trends.Many readers choose to comply with a popular look for the sake of being socially accepted, and this draws our attention to how different trends represent people collectively, depending on where they are and what they choose to value.

Looking at the different epochs of fashion, nothing could be more intriguing than the ‘flapper girl’ phenomenon of the late 1920′s.

During the Great Economic Depression, women were expected to keep up with the norms of wearing stockings outside the home. Due to the dire conditions, most began to wear sheer varieties that were poorer in quality. Many simply took charcoal and drew vertical lines at the back of their calves up till their knees! The Flapper Girl costumes, which were a rage, were simple satin tunics with tasseled lace, buttons and stone-sequined work. Women tended to make tassels out of their ragged clothes. The hairstyles looked greasier. Tight curls stuck to the head, most probably the result of downgraded lifestyles which didn’t allow many to bathe and perfume themselves as they did before. As the unit of female labour in factories soared , the craze was to look more masculine ; a statement of economic independence. This went hand in hand with the ‘red lipstick madness’ during the 1940’s , symbolizing adult sexuality and womanhood.

Soon the economic boom of the late 50’s  splashed onto Hollywood and other movie capitals around the world. The skinny Flapper Girl was now told to blossom and increase in dimension. Full-figured actresses paved the way for bigger hair, tighter skirts, brighter lipsticks and vibrant pumps, something we happen to idolize in fashion magazines today.Everything had to be bigger, recreated if lacking, heightened and overtly sensual.

The 1980′s called for an androgynous look for men and women. It was about defying every norm there was in fashion and film. Were the outcomes terrible? Sometimes they were, but they were iconic. People were now financially comfortable and were caught up in the excitement of technological advancement (traces of which could  be seen in the wave of “sci-fi” films an robotic dance moves) . 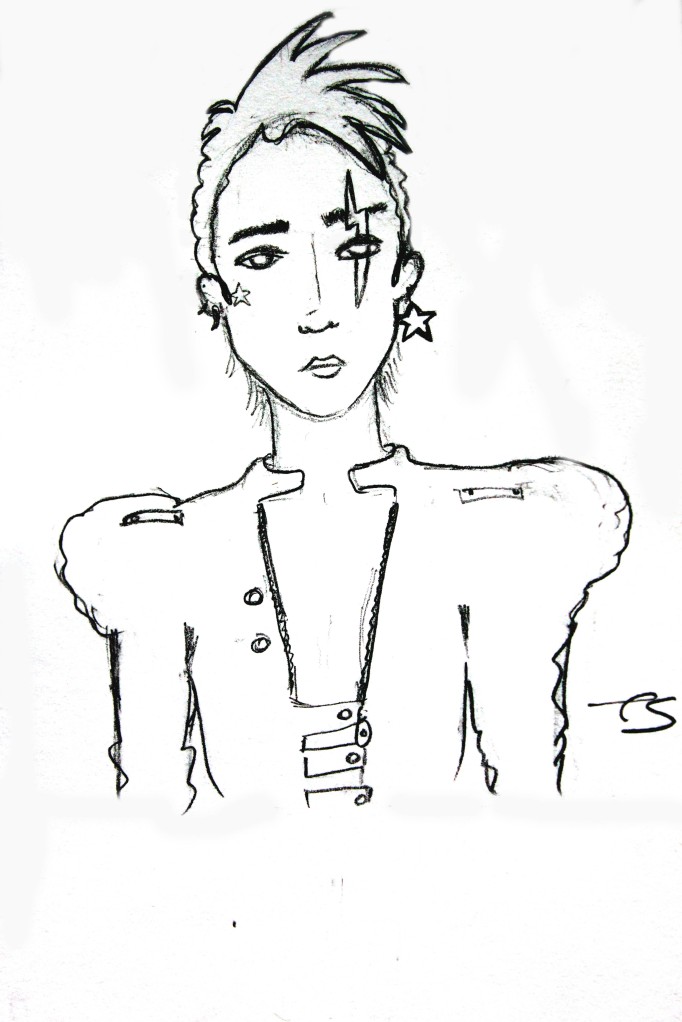 While brands became a way of life, the 90’s was about the destruction of the superficial self. Baggy t-shirts, blue or black lipstick, formless hair and ripped jeans filled up our screens that were most likely tuned to MTV. It was concerned with appearing to not care about how you looked.

Posts on fashion allow people to  choose what style to mimic, and to observe changes in fads, believing that they unveil certain characteristics of people in particular socio-economical situations across the world. In the long run, people need to let their hair down, and stop worrying about “what’s in or out’’, because things will come around full circle, eventually.

My stout tailor, or ‘Master Ji’ has his own workshop in a 2 x 3 hole on the corner of a corridor in the heavily polluted car park of a market place. His eyes have grown smaller and darker over the past year and a half, ever since the widowed lady who employed him and his men at a reputable Stitching-Tailoring shop near the entrance of the market place, realized that the venture was too much to maintain. The business had shut down within 2 days, and well Master Ji decided to grab the best two tailors of the kharkhaana and start his own little thing. His clients have remained loyal to him through the dark murky times where they have had to choke and splutter on sudden bursts of fumes of exhaust vents leading down directly above the tailor’s shop, scream till their jaws ached on top of the deafening hum of mega-electricity generators that groan and shriek diagonal to Master Ji’s long flat table. Yesterday this table was found inside the shop itself, with a new face sewing behind it. He was squished in such a way that the mind boggled when it tried to map out a possible exit route. Inspectors had decided to survey the area and opined that the flat table was a security hazard of some sort-forget the vents, the tiny corridor suffocated with open wires, that goddamn table had to be inside the shop or they would be out. 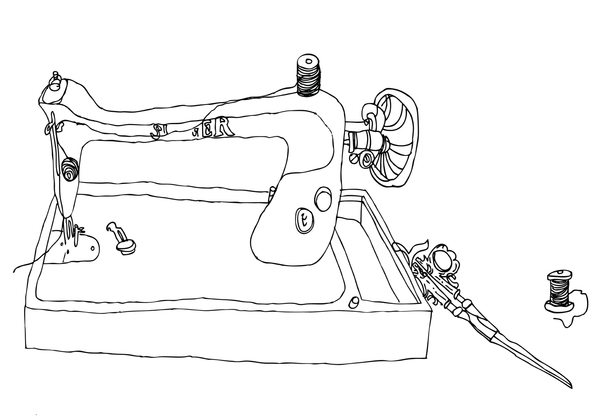 Master Ji’s supervision over his worker men (never more than two at a time) has been efficient on a general level, despite the ups and downs, or rather the too-loose and too-tights. His main talent (thanks to me- a behenji who thinks that buying branded clothes from malls is a waste, when there is so much good running material  and skilled labour around) lies in the ability of copying designs from magazines-especially chic cuts from editorials. People usually donate magazines to him , or forget them there, or are promised that they will be returned once he has made something for his wife. Flipping through them for immediate inspiration is great.

But sometimes things get so tempting you just want to rip them apart. Today I ripped a few pages from a Grazia magazine dated to 2008.

I was flipping away when I saw (in my opinion) the most creative and endearing editorial shots taken of models in the setting of an Indian railway platfrom/train. As he was furrowing his dark eyebrows while listening to a client, I gasped and pressed my fingers down on the top edge of the page pulling it with a loud RRrriiip! (the generators don’t function during winter) He stopped and gave me a few “what the hell are you doing to my property” blinks. I showed him the spread of a girl in tiny shorts and shook my head at him “It’s not like you’d ever make THIS would you?”-he shook his thick carpet of hair back in response. This happened 5 more times when he began to chew on a tiny white toothpick with his front teeth more violently than ever. I had to give him that smile (you know the one where you have to scrunch up your nose)  and put the magazine down…. 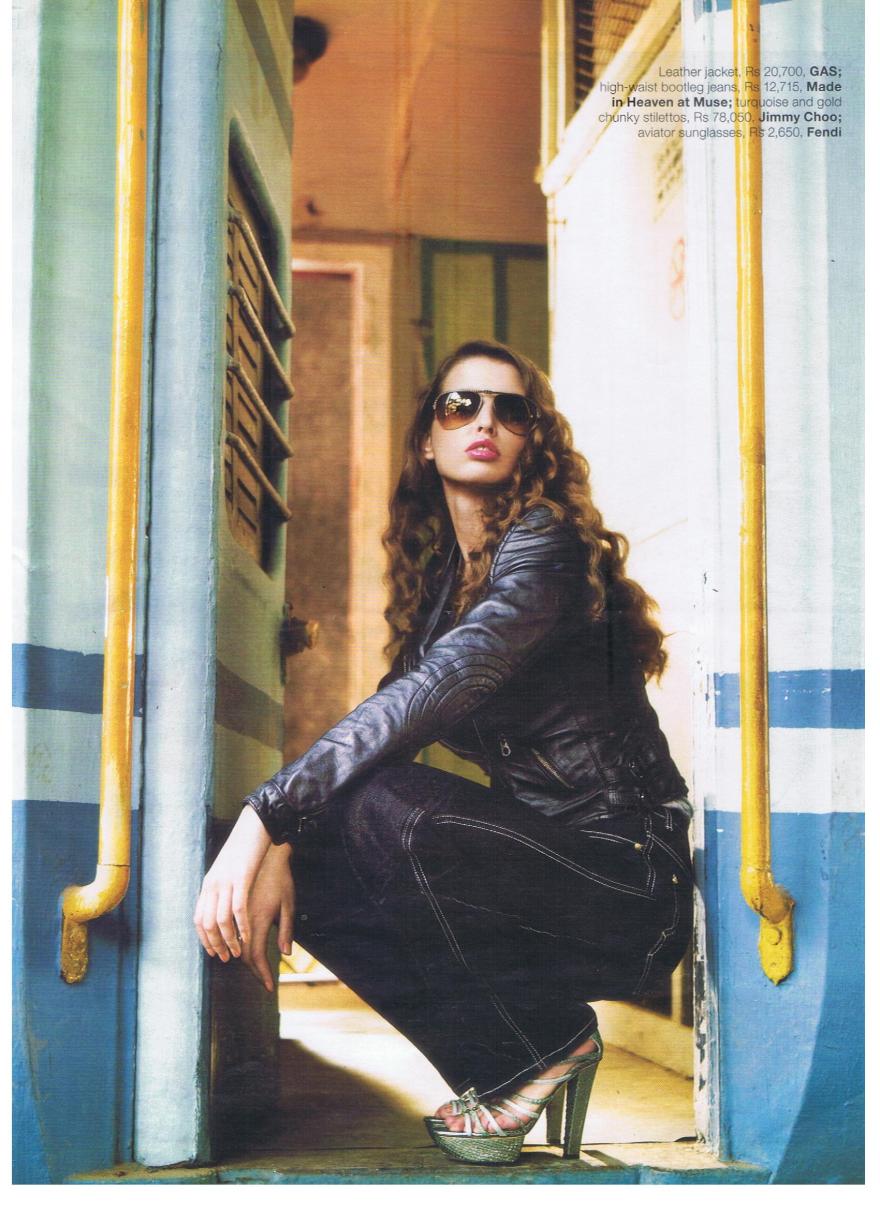 After you watch this video, you may then (like moi) begin to wonder if you could do anything creative with left over boxers or tee’s…..ahem…